» » Why Does Fuu Want The Sunflower Samurai

Fuu (フウ, Tanagers), full name Fuu Kasami (Kasami Fuu ), is the tritagonist and leading lady of Samurai Champloo. Following a series of circumstances, she tricks Mugen and Jin into accompanying her into her journey in finding the "Sunflower Samurai". Fuu has brown hair that is tied in the style of a ponytail with bangs parted where a small portion hangs down to the right while there is a larger portion hanging toward the left side, brown eyes and she is shown to have color pink fingernails and toenails. She wears a deep pink kimono with a floral pattern and she carries a kaiken (woman's dagger) with a pink handle and sheath, and a floral pattern matching her kimono. Attached to the kaiken are three netsuke (charms): a skull (a Christian pendant from her father), a pair of dice and a dog. Fuu's relationship with Mugen and Jin is apparently sororal (of or like a sister) where she has a bright and trusting personality. She is highly prone to accidents, getting lost, and finding trouble, although she is quite practical. She often puts on a front of being more worldly and experienced than she actually is so as not to appear completely idiotic in front of her bodyguards. Out of the trio, she acts like the sister to Mugen and Jin, which is shown when Mugen and Jin are willing to save her multiple times even when not obligated to. 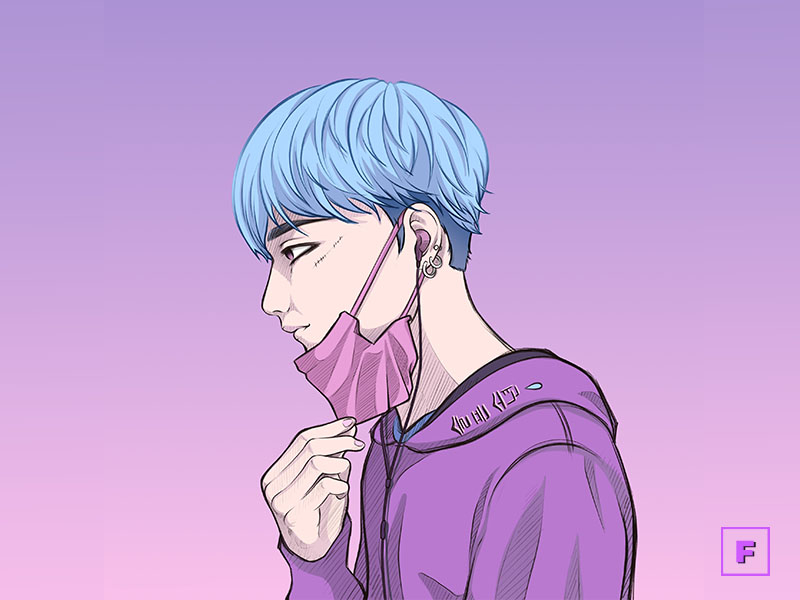 An example being when Jin found out Yukimaru was using her as bait, and when Kariya Kagetoki, Umanosuke. Toube and Denkibou were planning to take her hostage. Fuu is the daughter of Seizo Kasumi and an unnamed woman. During the Shimabara Rebellion (which was the uprising of Japanese Roman Catholics due to heavy taxes and abuses from officials), her father was one of the leaders in the rebellion. The Japanese sought the help of the Dutch army which helped quell the rebellion down and the Shogunate sought for Seizo's death. Fearing for his family's life, Seizo ran away to protect his wife and children where Fuu's last memory of him was running through a field of sunflowers. This is why she refers to him as "The Sunflower Samurai" or the "Samurai who smells of sunflowers." Without her father around to support them, Fuu and her mother led a difficult life until her mother died of illness and she worked under an elderly couple name Kikuzo and Ogin in a tea shop.

In Tempestuous Temperaments, Fuu has to deal with rowdy customers, especially an individual name Tomonoshin Shibui. She's advised to restrain herself since Tomoshin is the son of a governor. Meanwhile, one of the customers is pestering an innocent old man in the tea house and Fuu tries to interfere before being silenced and getting dragged into the back. Back at the tea house, Fuu prepares to deal with a new customer, who turns out to be Mugen. He asks for some water, but she explains that he needs to order more or leave. He invites her closer to him and tries to make a deal: 50 dumplings in exchange for getting rid of the ill-mannered clientele. She tries to haggle down to 20, but she's called to bring tea to the customers, accidentally tripping and spilling some on the Tomonoshin Shibui. Enraged, he and his fellow samurai pin Fuu down to the table and threaten to start cutting off body parts, but she manages to yell "100 dumplings", which gets Mugen's attention and motivates him to take the governor's son and his men on in battle. Another customer Jin arrives and Mugen, mistaking Jin for one of Tomoshin's bodyguards, attacks him with Fuu trying to stop them.

While fighting, groups of thugs burn down Fuu's tea shops while Mugen and Jin are arrested. Fuu is lamenting the loss of the tea house that Kikuzo and Ogin invite her to stay with them since she has no family, but she refuses, instead of going off to rescue Mugen and Jin. At the front entrance of the governor's house, she tries to bargain with the man guarding the door to get in, but it doesn't work and she's forced to knock him out with the help of her adorable squirrel sidekick Momo. Fuu finds the cage where Mugen and Jin are being held captive, and she promises to free them in exchange for a favor: finding a samurai who "smells of sunflowers". However, she's unable to break them out in time and is forced to escape from the guards. The next day, word gets out about a public execution, and Fuu correctly suspects that Mugen and Jin are the victims. As the two are taken to the execution site, Fuu quickly thinks of a plan to try and save them, obtaining miscellaneous supplies to aid her. Mugen and Jin successfully escape when Fuu distracts the guards by grabbing a couple of items out of her dress, which turns out to be bomb-shaped fireworks. She then lights and throws the bombs into the execution site, setting off a massive display of lights that scares the remaining guards. Fuu manages to meet up with Mugen and Jin who are about to rekindle their fight from earlier, but she tries to stop them since she still needs the favor from them.

She decides to settle it by flipping a coin, which Mugen decides to flip for her. It comes up tails, meaning they have to postpone their conflict, and the episode ends with the three escaping the pursuit of oncoming guards. In Redeye Reprisal Mugen, Jin, and Fuu are trying to get some money together, but they all realize they don't have much on them. Mugen and Jin are about to get into a fight, but Fuu reminds them of the promise they made to her regarding the samurai who smells of sunflowers. They proceed to give her the third degree and bombard her with various questions regarding their quest. Amidst the arguing, Fuu's stomach grumbles, and they all decide to get something to eat. They head out to the first food place they come across and order some yaki-manju (dumplings made from flour soaked in sake and then covered with miso and grilled).

It is revealed the group of men had orders to seize Fu, Jin, and Mugen because of their escape.

They argue about how to divide the order amongst the three of them before a bird swoops in and steals their treat. In the midst of this, Jin overhears a conversation from the group of men sitting a short distance away from them about an ogre who massacred innocent people. Fuu doesn't trust the men, but she accepts a drink from them and passes out. It is revealed the group of men had orders to seize Fu, Jin, and Mugen because of their escape. Fuu meets a deformed individual name Oniwakamaru who resembles an ogre, but is not afraid. Mugen, after being poisoned by Hotaru tries to save Fuu but meets Oniwakamaru. They both fight evenly, but when Fuu tells them to stop, Oniwakamaru lowers his weapon, allowing Mugen to deal the lethal blow. Mugen, Jin, and Fuu would go on to have many adventures together. Often times they split up due to being annoyed with Fuu, but would come back to help Fuu in the end. The first example is Mugen and Jin ditching Fuu, but would come back to take on Rikiei Nagatomi and his Yakuza gang.

Fuu would go on to meet unique individuals like Osuzu, Sousuke Kawara Hishikawa Moronbu, Nagamitsu, Sakami Manzou, Budokiba and Shinsuke. She helps Jin rescue Shino from a brothel, but doesn't meet Yatsuha Imano face to face. In Stranger Searching, Fuu, Mugen, and Jin meet a gay Dutchman name Joji Titsingh whose real name is Izsaac. Fuu tells Izsaac reveals that she's trying to find the samurai that smells of sunflowers. Izsaac says that he has not heard of the samurai that smells of sunflowers. Upon being shown a skull with a loop attached to it by Fuu, Izsaac becomes fearful and whispers to Fuu that she must not show this to anyone. Izsaac tells Fuu to go to Nagasaki, and she will find her answers there before leaving. In Lethal Lunacy Fuu and Jin watch Mugen train against his fight against a skilled opponent name Shoryu. In The Disorder Diaries, Mugen and Jin read Fuu's diary, but are outraged when she trolls them. In Misguided Miscreants (Part 1) and Misguided Miscreants (Part 2) Fuu learns about Mugen's past and meets Mugen's childhood acquaintances Koza and Mukuro. She is shocked to see Mugen presumably dead, but is relieved to find Mugen alive. In Lullabies of the Lost (Verse 1) and 2 Mugen and Jin are annoyed and irritated that Fuu won't tell them why they need to travel with her and leave.

While lost, Fuu meets Okuru, unaware of his past. She is attacked by Jin's childhood friend Yukimaru and watches Jin kill him. She and Jin find Mugen and Okuru being attacked by agents, and Mugen kills the agents in a rage after them killing Okuru. In the end, Fuu reveals to them that the sunflower samurai is her father, and she wants them to help her find him after he abandoned her. In War of the Words, Fuu finds out Mugen cant read, and watches as a man name Bundai forcefully takes Mugen away to teach him. She meets Tatsunoshin and Kazunosuke. In Unholy Union she helps a girl name Yuri expose Xavier III manipulation of Christianity, and him stealing weapons. Yuri then tells Fuu, the name of the sunflower samurai, which is Seizo Kasumi. In Elegy of the Entrapment (Verse 1) and 2 Fuu, Mugen and Jin meet a blind musician name Sara. Fuu defends her from thugs, and Sara accompanies them on their journey. Sara asks Fuu if she could borrow one of her bodyguards to go on her journey, and Fuu chooses Jin thinking Jin would refuse Sara's offer. However, Jin accepts which makes Fuu cry in despair much to the annoyance of Mugen.