» » Why Does Cloud Look Different In Kingdom Hearts 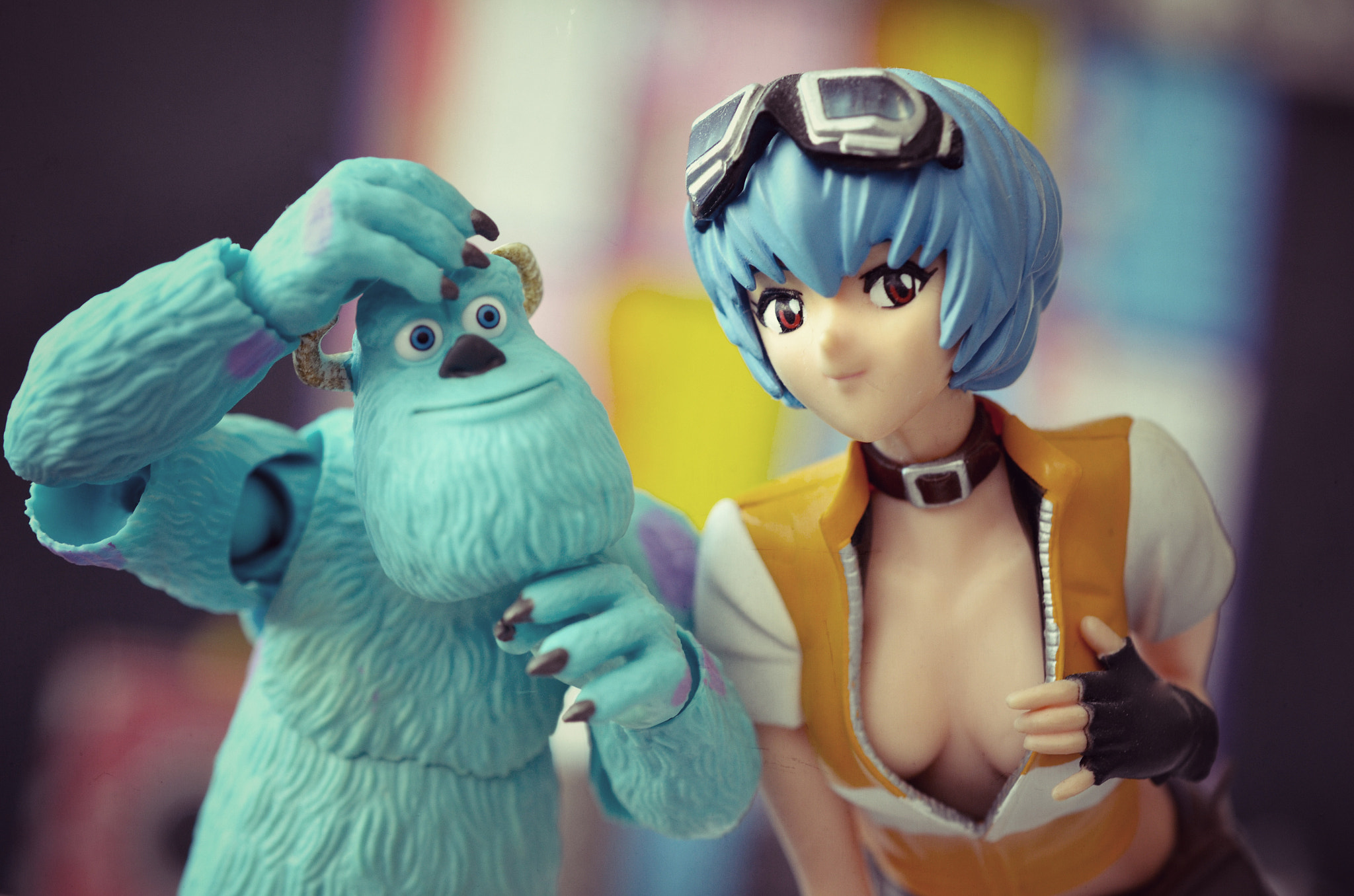 If You Want To Be A Winner, Change Your Manga Philosophy Now!

Protruding from his back is one large demonic wing, a counterpart to Sephiroth's angelic one. Although this wing appears in every artwork of this outfit, it is usually not initially present. In Kingdom Hearts, it only appears while he's using Omnislash. In Kingdom Hearts Final Mix, it also appears in the cutscene with him and Sephiroth. In Kingdom Hearts: Chain of Memories, it appears whenever he attacks (though its remake sticks with just Omnislash). The only game in which the wing is seems to be present at all times is Kingdom Hearts: coded (and Kingdom Hearts Re:coded). In Kingdom Hearts II, Cloud is dressed in his Final Fantasy VII Advent Children attire, his hair also having changed to reflect his movie counterpart's. He wields his Fusion Swords from Advent Children as well, though it is bandaged like the Buster Sword. The lines between the six separate swords look less distinct, like the lines were simply engraved on the blade, which may mean it is simply a single sword, although this could just have been to make animation easier. The wing from his previous outfit is mysteriously absent.

, Cloud's face looks similar to, if not exactly like, Sephiroth's. I'm looking for someone. Hades promised to help. I tried to exploit the power of darkness, but it is backfired. I fell into darkness, and I couldn't find the light. Cloud first makes his appearance in the Olympus Coliseum, striking a deal with Hades: if Cloud eliminates Hercules in battle, Hades will lead him to his nemesis Sephiroth. However, Cloud also has to fight Sora, so that he may move on to Hercules in the preliminaries rankings. After their battle, Cloud is either defeated, or comes out victorious, but refrains from killing Sora. The outcome of the fight does not affect the storyline, and the only reward for winning are the 80 experience points rewarded. However, as Cloud does not kill Sora, the results are not favorable for Hades; forcing him to summon Cerberus. The three-headed beast and guardian of the Underworld catches Cloud off-guard, pinning him to the ground. At this point, Hercules comes to the rescue, defending the unconscious Cloud. Sora then moves in to finish the battle, giving Hercules the chance to take Cloud to safety.

Afterwards, Cloud waits at the entrance to the Coliseum, deep in thought. Sora asks him why Cloud worked for someone as shady as Hades, and Cloud replies that he was looking for someone, and tried to use the darkness to his advantage, but failed. He admits that he fell into darkness, and couldn't find the light. But Sora comforts him, saying that he too is searching for his light. Cloud then grants Sora the Sonic Blade ability, and walks off, but not before Sora offers a re-match. Cloud confidently says he'll pass, but later in the game, he can be fought in certain cups at the Olympus Coliseum. Cloud eventually manages to find Sephiroth in Kingdom Hearts Final Mix. Cloud manages to locate Sephiroth in the Coliseum, and both express that they have been searching for each other. Cloud also feels that in order to awaken from his nightmare, he has to defeat his darkness; namely, Sephiroth. Sephiroth tries to convince him to turn to that darkness, but Cloud refuses, and the two battle. The outcome of the battle is unknown. During the end credits, Cloud is led by Cid to Hollow Bastion, and reunites with Leon, Aerith, and Yuffie in the Library. I'm not here for the Cup. Just Hercules. Today he loses more than the competition.

However, Sora interferes and defeats the God of the Underworld.

Cloud once again appears in the Coliseum, constructed from Sora's memories. Again, he serves as a mercenary for Hades. However, Cloud is working for Hades to regain his lost memories, not to find Sephiroth. Hades promises to help him, but only if Cloud competes in the games and kills Hercules. Completely ignoring Sora, Cloud confronts Hercules. However, Cloud only manages to wear Hercules down. Hades, no longer having any use for Cloud, fires him and knocks him out. Hades then attempts to kill Hercules on his own now that he is exhausted. However, Sora interferes and defeats the God of the Underworld. After the battle, Cloud wakes up. He apologizes for his actions. Sora again comforts him, saying that the important memories are never truly gone. Sora also says that even the tiniest thing can help a person remember things they thought they had forgotten. Cloud shows his gratitude for Sora's help by granting him the Cloud card. However, he declines Sora's offer of joining them. Sorry to keep you, Sephiroth! Cloud appears once again in Hollow Bastion, garbed in his Advent Children attire and Replacing the Buster Sword with the Fusion Swords from Final Fantasy VII Advent Children. He reveals to Sora that he is seeking to defeat his darkness, which is embodied by Sephiroth. He asks Sora to help him, but also warns him that Sephiroth will try and turn Sora to the darkness. During their meeting, Aerith also speaks to him.

Not wanting her to follow him, he promises her that no matter how far he goes, he will always come back to Hollow Bastion. Though Aerith initially feels that he doesn't seem to be so sure, she is in the end confident in him. Cloud also aids the residents of Hollow Bastion in defending against the Battle of the 1000 Heartless. He and Leon are seen at the Ravine Trail, back to back with their swords raised as Heartless surround them. The two banter playfully back and forth, then proceed to fend off the Heartless. However, as he fights, he ends up separated from Leon, and Sephiroth makes his appearance. Cloud expresses his belief that once Sephiroth is defeated, the darkness within himself disappears. However, Sephiroth reminds Cloud of his dark past, though it is not elaborated on. Tifa, who had been searching fervently for Cloud, also arrived. However, her presence causes Cloud to see the light, causing him to wince. Sephiroth then vanishes, and Cloud runs off before Tifa can get to him. Cloud is then seen with Leon again who is worried about Sora, Donald, and Goofy. Cloud tells him to relax because those three aren't going down that easily.

He also tells him before leaving that Sora is a lucky kid. After the 1000 Heartless battle, Cloud keeps at a distance from the others and avoids fighting the Heartless from Space Paranoids, knowing that his friends have enough strength to fend off the MCP's tricks. After the MCP is defeated, he is seen once again with Leon when Tron shows them a sight of when their city was first built, and so reminded everyone of its true name. Cloud, still searching for Sephiroth, can be found in the town center after this. Sora, having just fought Sephiroth, reveals that he is at the Dark Depths. Cloud then goes off to settle the score. Sora manages to get to Sephiroth first, and he asks where Cloud is. Just then, Cloud arrives, and Sephiroth makes more comments on how Cloud can never let go of his darkness. Cloud grows angry, demanding he shuts up, and the two battle. However, Sephiroth says that defeating him will be futile, for Cloud's darkness will always hold him back. Sephiroth's words begin to drag him into the depths of despair, but Tifa once again arrives. Cloud warns her to stay away from Sephiroth, but she refuses, for she wants to help him.

Goofy asks where Cloud went, and Sora explains that he went to fight a great battle.

Sephiroth says that it is futile, for Cloud will always have darkness within him. Tifa doesn't deny this, but retorts that as long as he is surrounded in light, the darkness within him can't be reached. Tifa attacks Sephiroth as Cloud watches, but when flashes of light blind Cloud, Sephiroth attempts to strike Cloud. However, Cloud successfully parries the attack, and takes a stand between Sephiroth and Tifa. Tifa offers Cloud her light, and though Sephiroth insists that the light doesn't suit Cloud, he begins to glow with a bright light, and the fight resumes. In a final brilliant flash of light, Cloud and Sephiroth rise into the air, then vanish. Goofy asks where Cloud went, and Sora explains that he went to fight a great battle. When Sora asks Tifa what she will do now, she says that she will just have to keep looking and that light is easy to find. Tifa then gives Sora the Fenrir Keychain as thanks for helping. Data-Cloud has been shown to travel and battle Heartless with Data-Sora and Data-Hercules, making Kingdom Hearts coded his party member debut. He makes a deal with Data-Hades about visiting other worlds with the Secret of Heroes. He wants to break away from his past and his powerlessness after he takes care of Data-Hercules and Data-Sora. It seems the reason he bargained with Data-Hades is so he could become stronger to protect someone.

He learned from Data-Sora and Data-Hercules that his true strength comes from his heart when he protects someone; for example blocking one of Data-Hades's fireballs that is about to hit Data-Sora and Data-Hercules. When fighting, Cloud remains in a "combo" of astonishingly rapid sword strokes and occasionally Thunder-based magic attacks, only fighting normally when he seems to be winning and Sora or the others are near. His attacks include the technique "Sonic Rave" where he dashes through his opponents; he can slash his opponents using a powerful combo called "Cross Slash"; he can use "Braver" where he jumps in the air and comes down hard. When enraged, he activates "Omnislash", where he surrounds himself with fire and lightning and starts flying and attacking in a Sephiroth-like manner. Essentially, his entire moveset consists of his original Limit Breaks. Although Cloud is a much weaker boss than Sephiroth in Kingdom Hearts, the fact he was able to go head-to-head with him in Kingdom Hearts II implies that he wasn't fighting as hard as he could against Sora.

Because he acted as a supporting character, but not as a party member in Kingdom Hearts II, Cloud is immune to damage during the period of time he helps Sora's party. In Kingdom Hearts: Chain of Memories Cloud has three sleights he can use. Cloud's basic technique is Cross-slash (凶斬り, Kyougiri?, lit., Kyougiri-kai? Cross-slash. His strongest technique is Omnislash (超究武神覇斬, Choukyūbushinhazan?, lit. In Kingdom Hearts II, Cloud instead uses Omnislash Ver. 5, based on a technique introduced in Final Fantasy VII Advent Children. Gameplay wise, Cloud is by far the most powerful ally in Kingdom Hearts II; along with being immune to damage, he is able to deal a large amount of damage in a very short amount of time. When using a cheat device to place him in your party, he often singlehandedly obliterates even the most dangerous bosses in the game. Cloud Strife is the main protagonist of Final Fantasy VII. Cloud was born and raised in the small town of Nibelheim with Tifa. When he was 14, he aspired to be in SOLDIER, an elite military group working for the Shinra Company. Contrary to his journal entry in Kingdom Hearts II, Cloud never made it into SOLDIER, but due to the traumatic death of Zack Fair, a close friend of his who was a real 1st Class SOLDIER, Cloud subconsciously adopted Zack's memories. He and his friends seek to defeat Sephiroth, a legendary SOLDIER who had burned down Nibelheim, killing many people including Tifa's father.