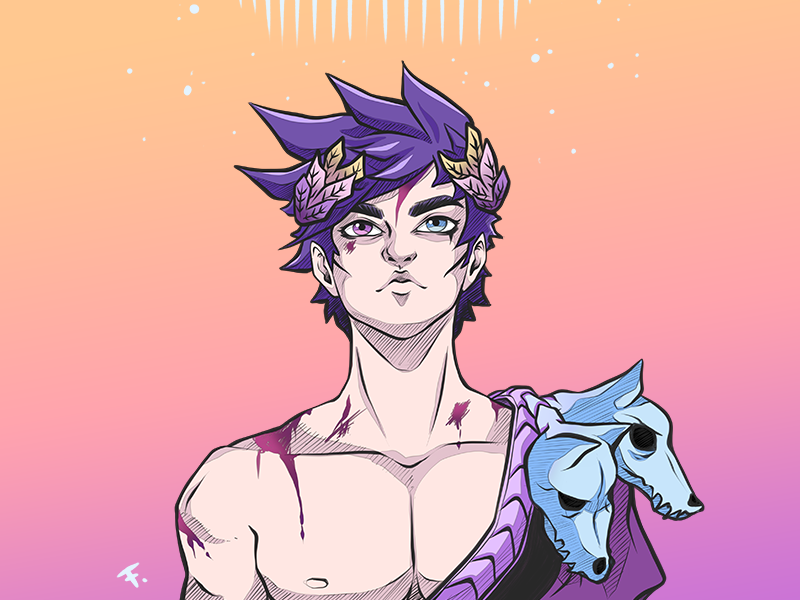 Seirin High vs. Rakuzan High is the match of the Winter Cup finals. Kuroko told his teamsmates in Seirin the story of his past in Teikō. The time he spent with the Generation of Miracles and how their talents affected their way of play. As everyone headed home from Kagami's house where they gathered to listen to Kuroko's story, they imagined and feared Rakuzan's current strength. With Akashi and three of five Uncrowned Kings, it would be near impossible to beat them. The team, however, decided that showing Seirin's full strength will be sufficient to beat them and win the finals. On the day of the finals, Riko has her hair cut off by Hyūga in his father's shop, Kiyoshi has breakfast with Izuki's family by coincidence, Kagami meets Himuro to settle their matters, and Kuroko is in Seirin's gym remembering everything from the time he had joined Seirin to the present, and realizes that he is glad to be playing basketball. Kuroko then leaves for the Winter Cup building, where he will meet the rest of his teammates. During the warm-up, Seirin notices that not one of Rakuzan's players has missed a shot, even though it is just a warm-up. On the other side, the Rakuzan members are preparing to battle their pre-arranged Seirin members.

39;t catch the ball as Kuroko used too much strength.

Each of the players has their own mark, who they are intending to go against. As Akashi states, that he will be joining the game from the start, a ball rolls up to Akashi who then returns it to Kuroko. Kuroko replies that he has, as Akashi tells him to show him his basketball. Kuroko denies, saying it will not be his basketball he will be showing, but rather Seirin's basketball. Akashi accepts Kuroko's challenge. The starting members and staff of each team is introduced through the stadium's speakers. Just before the tip-off starts, Kagami asks Kiyoshi if he could jump instead of him. Kiyoshi agrees and lets Kagami jump the tip-off. The tip-off commences as Kagami and Nebuya jump for the ball. Due to Kagami's high jumping ability, he was able to get the ball and pass it on to Izuki, who then passed the ball to Kuroko, who then used his Ignite Pass Kai, to pass the ball further to Hyūga. Hyūga doesn't catch the ball as Kuroko used too much strength. The ball dribbles under the hoop but luckily Hyūga manages get it, trying to make the basketball when he is stopped by Mibuchi who was guarding him. Rakuzan counter attacks, as Akashi passes the ball to Nebuya, who then heads to make the basketball. Kiyoshi who tried to intercept him, was stopped by Mayuzumi. As Nebuya was about to make the basketball, he is stopped by Kagami who steals the ball again and goes for a counterattack.

As Kagami runs to the basketball, he is stopped by Akashi who went to guard under the basketball. However, due to Kagami's strong will to win with his teammates, he was able to enter the Zone and use Meteor Jam to score. As Kagami has entered the Zone, he has managed to score baskets with two consecutive Meteor Jams. As Mayuzumi attempts to score, he is stopped by Kagami who has taken on the position of both offense and defense. As the match progresses, Kuroko is subbed-out for Mitobe. Seirin plans to let Kagami focus only on the offense, leaving the defense to the rest of his teammates. As the match resumes, Kagami passes Hayama who was guarding him and advances to the basketball, where Mibuchi and Nebuya were guarding. However, Kagami uses a fake evading them, scoring the basketball. As the match goes to Seirin's favour, Akashi decides to swap marks with Hayama, intending to guard Kagami himself. Mibuchi scores a three-pointer which increased Rakuzan's score, however it is still 11-5 for Seirin. Seirin counterattacks with Izuki passing the ball to Kagami, who at the time was marked by Akashi. As Kagami faces Akashi, Akashi uses his Emperor Eye to try and stop Kagami, however, Kagami passes and heads for the basketball. Kagami missed the shot. Akashi then goes on to tell him that he was looking down on Akashi who leads Kagami into a trap.

He is stopped by Kagami but Akashi uses his Ankle Break make him fall.

Akashi made Kagami take one more step in order to pass him, this was in Kagami missing the shot due to the angle the shot wasat at. Akashi has the ball and uses a screen to advance further to the basketball. He is stopped by Kagami but Akashi uses his Ankle Break make him fall. Akashi passes Kagami and advances further to the basketball. Izuki uses his Eagle Spear to try and steal the ball from Akashi, but Akashi evades and passes the ball to Mibuchi. Mibuchi advances to the basketball but then Kiyoshi appears, marking him. Mibuchi, however, uses a double clutch and passes Kiyoshi, shooting the ball. Just when he was about to score, Mitobe blocks him, stopping him from scoring. As Seirin counterattacks, Kagami has his doubts on whether he can actually beat Akashi, but seeing his teammates support him, Kagami got back in the game. Izuki passes the ball to Kagami who was being blocked by Akashi. Kagami passes the ball to Mitobe, knowing he can't beat Akashi in his current state. Mitobe uses a hook and scores the basketball. Rakuzan counterattacks with Akashi passing the ball to Mayuzumi who then scores the basketball.

As the ball falls down, Nebuya rebounds and passes the ball to Akashi who then swings it to Hayama.

Not wanting to risk the advantage in point difference, Riko decides to put Kuroko back in the game. As Kuroko enters the court he is being noticed by the audience and the Rakuzan players, noting that his small presence is fading away. During the player substitution, Hayama approaches Akashi and asks him for another chance at marking Kagami, as he wants to return the favourite. As the game continues, Seirin is in control of the ball as they pass it to Kagami who is marked tightly by Hayama. Kagami makes a crossover but leaves the ball in place for Kuroko to pass it through to Hyūga. Hyūga however, is blocked by Mibuchi resulting in him not scoring the basketball. As the ball falls down, Nebuya rebounds and passes the ball to Akashi who then swings it to Hayama. Hayama is marked by Kagami in return, but he uses his four fingers to power-dribble the ball, resulting in him passing Kagami and scoring the basket. Now it is 15 - 11, and it is yet again Seirin's ball.

Izuki has the ball and passes it to Kuroko who then uses his Misdirection to pass it through. Kuroko's pass is intercepted however, resulting in Rakuzan stealing the ball and scoring yet another basketball. Akashi approaches Kuroko to tell him the reason he didn't want Kuroko to learn anything else other than passing back in Teikō. He tells him that if he would, he would lose Misdirection completely as other moves are too flashy. Akashi tells Kuroko he is now only an ordinary player with no value whatsoever leaving Kuroko shocked at the loss of his abilities. The game continues with Kuroko marked by Mayuzumi. As everyone has their attention on Kuroko, Akashi uses this to steal the ball from Izuki. The ball however goes out of bounds, meaning it's Seirin's ball. Seirin requests for a player substitution as Kuroko is changing with Tsuchida. When Kuroko goes to sit down, Riko asks him to sit next to her.

The game resumes with Kuroko having the ball.

She then encourages Kuroko not to give up and tells him that he will definitely go back in the game soon. Meanwhile, Tsuchida explains the situation to the rest of his teammates telling them that they will be taking on the challenge of playing with Kuroko, as without him, the chances of victory are none. Seirin keeps their confidence as they say that it is time to repay Kuroko and Kagami for all the times they have saved the team so far. Hyūga, however, then goes on to say that it is natural for teammates to help each other. The score is 15 - 15 and the ball goes out of bounds yet again. Seirin has a member change, with Kuroko going back in. The game resumes with Kuroko having the ball. He uses his Vanishing Drive in order to pass Mayuzumi. This however failed, leaving Kuroko still pressured by Mayuzumi. Kuroko then attempts a Phantom Shot, which was blocked as well. Rakuzan steals the ball and goes for a counterattack.

Just as Hayama is going up for the basketball, he is stopped by Kagami. Mibuchi later on catches the ball and scores two points for Rakuzan. There is a rebound and Nebuya was just about to catch the ball, when he is suddenly stopped by Kiyoshi who used his Vice Claw to steal the ball. Kiyoshi then passes the ball to Hyūga who uses his Barrier Jumper to score a three pointer. During the break, Seirin decides to bench Kuroko in the 2nd Quarter, but swears he will return for the sake of victory. Meanwhile, Akashi tells his team that Hayama, Mibuchi and Nebuya will be responsible for scoring while Mayuzumi will be responsible for passing. The game resumes and Mitobe is subbed in instead of Kuroko. Rakuzan is in control of the ball as Mitobe is seen guarding Mayuzumi. Akashi passes the ball to Nebuya but misses. Suddenly Mayuzumi disappears and uses Misdirection to pass the ball to Mibuchi who scores the basket. Everyone is surprised as Akashi tells Seirin that Mayuzumi is the new version of the "Phantom Sixth Man". Akashi passes the ball to Mayuzumi who then uses Misdirection yet again to pass the ball to Nebuya, as Nebuya scores the basketball leading to the score of 21 - 26 for Rakuzan. Seirin counters with Izuki holding the ball.

On the bench, Kawahara suggests Riko to sub Kuroko back in to guard Mayuzumi, in order to stop his misdirection. Riko however tells him that that is pointless. Back on the court, Hayama steals the ball from Kagami and passes it to Akashi. Akashi then passes the ball to Mayuzumi, who is blocked by Mitobe. Unable to use Misdirection, Mayuzumi attempts a basketball instead and succeeds. Back on the bench, Riko tells Kawahara that subbing Kuroko back in would be pointless, as he can stop Mayuzumi's Misdirection, but he would not be able to stop him in a one on one battle. Walking past the Seirin bench, Mayuzumi notices Kuroko watching him, but then realizes that he is not watching him, but rather observing him. The score is 21 - 28 for Rakuzan as Seirin decides to do a member change. Riko subs Furihata for Mitobe as Izuki goes on to guard Mayuzumi, while Furihata is given the task of guarding Akashi. As the game resumes, Mibuchi tells Akashi that it is the time for the throw in.