Roronoa Zoro is the swordsman and (unofficially) first mate of the Straw Hat Pirates, wherein he is the most dangerous after his captain Monkey D. Luffy, and one of the top four fighters in the crew as the "Monster Quartet". His dream is to become the greatest swordsman in the world. Zoro is regarded as one of twelve pirates who are referred to as "The Worst Generation" (formerly known as "The Eleven Supernovas") and was a former bounty hunter before joining Luffy's crew. Weaknesses: Zoro has a very poor sense of direction. Zoro is a tall, muscular young man with lightly tanned skin and black eyes. He always carries his three swords along with him, bundled up with a green haramaki over his right hip, allowing him to easily draw them with his left hand. Although his right hand is usually seen resting over them, he can also use this hand to pull his swords out before sitting down. He has three identical gold earrings on his left earlobe. Zoro normally keeps a black bandanna tied around his left bicep and ties it around his head when he is fighting seriously against an opponent. Zoro's body is covered with scars from his many battles, most notably the massive scar stretching from his left shoulder to his right hip that he acquired during his loss against the world's greatest swordsman, Dracule Mihawk, at Baratie. His other visible scars are the scars he inflicted upon his ankles in a desperate attempt to free himself from Mr. 3's Giant Candle Service Set by trying to cut his feet off at Little Garden.

His coat exposes his bare chest, revealing his haramaki underneath. 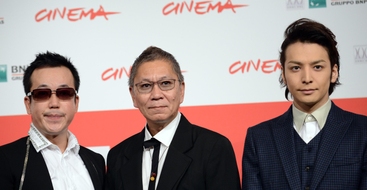 After two years of training with Mihawk, he gained another scar over his left eye, which is now implied to be critically injured as it is always closed. Zoro's other remarkable feature is his cropped green hair that is slightly slicked back, which Sanji often teases him about by calling him "moss-head" (marimo in Japanese) due to its resemblance to one. Other than his haramaki and bandanna, he wears a long, open dark-green coat closed on his waist and is held by a red sash, in which his three swords are currently tucked into, and his bandanna still tied around the left bicep of his coats. His coat exposes his bare chest, revealing his haramaki underneath. He also wears long, black trousers tucked under a pair of black boots. Whenever he gets serious and wears his bandanna, he takes off the top portion of his coat and lets it hang around his waist, thus revealing the haramaki and scars over his waist and lower clothing. While many people's first impressions that Zoro is close to that of a malicious killer, he is actually a stern, serious, and distanced individual, but often loses his temper in a goofy and exaggerated comical style. Outside of situations where he feels confident in battle, he rarely smiles, laughs or cries. Despite this, Zoro has a kind heart, even risking his own life to protect those he cares about. When fighting weaker or innocent people, he does try to hold back when fighting and use the dull side of his swords in order not to seriously injure them.

He has a strong sense of leadership and acts as a sound of reason for the crew who usually supports Luffy unquestionably. While technically not a samurai, Zoro maintains Bushido to a certain degree (eg He is always on edge when meeting new people and remains cautious to those he can't trust. However, Zoro can also be notoriously lazy and borderline narcoleptic, and has even a high tolerance for alcohol. His sense of direction is staggeringly terrible, as he can become completely lost with the simplest of maps or instructions. Zoro hates to lose and can be an extremely reckless daredevil to triumph as the fair victor, not caring about his own well-being when hurt gravely. He even regularly reverts to drastic measures to solve simple problems, suggesting solutions that others would normally consider to be their last possible, worst-case-scenario choices. He also is one of the first Straw Hat members to suggest killing someone or threatening to kill someone, something which Robin disapproved most of the time.

39;s trademark; his primary sword style, created by himself.

Furthermore, Zoro tends to face death in a defiant manner and show no fear of dying even when he is in a gravely injured state. He also lives for the trill of combat, even possessing deadly force and a murderous intent to kill if shown. Zoro can also be very vigorous when he is determined to achieve a goal or defeat an enemy. The risks that he will often take to pursue his dream of becoming the world's greatest swordsman often leave others wondering if he is crazy. As far as Zoro is concerned though, only he has the right to call himself "crazy". However, he is able to accept defeat when he perceives it to be inevitable. Also, Zoro does not care if any gods exist or not. Three Sword Style: Zoro's trademark; his primary sword style, created by himself. It is a style of sword fighting that deals with the wielding of three Katana; one in each hand and one in the mouth. There are many different techniques for this sword style, including Iaido, simultaneous slashing techniques with all three of his swords, compressed air projectiles etc. Oni Giri (Demon Slash): A three-way simultaneous slashing attack. Zoro crosses his two swords across his chest and places the blade in his mouth horizontally behind them. Zoro then approaches the target (usually at high speed) and cuts through by swinging the swords across his chest, resulting in a descending diagonal-crossing slash from both swords while the mouth blade performs a horizontal cut from either the left or right, depending on which side of his mouth he positioned the sword's main blade at.

360 Caliber Phoenix: This attack uses the air itself to slash the target from a distance.

One-Sword Style Sword Draw: Lion's Death Song: Zoro dashes towards the target at inhuman speeds, all whilst placing his sword upright, unsheathing it, striking the opponent with great power and precision and then sheathing the sword. Once the blade meets the hilt, the damage occurs. 360 Caliber Phoenix: This attack uses the air itself to slash the target from a distance. Flying Dragon Blaze: Using one sword wielded in his left hand with his right hand gripping his left wrist for support (or vice-versa), Zoro jumps high up into the air and slashes his opponent. After slashing them, Zoro's opponent then bursts into flames. Bird Dance: Zoro launches from his sword a crescent moon-like projectile of compressed air to the opponent with great speed, similar to 360 Caliber Phoenix. Great Dragon Shock: Zoro runs towards his opponent with Shusui held outstretched in one arm. He then executes a two handed overhead swing used to split his opponent into two from the top down. Haki: There are normally two types of Haki regular people can tap into: the Observation Haki which allows individuals to sense the presence of others, and Armament Haki which allows individuals to create an invisible armor around them. There is however a third type of Haki, Conqueror's Haki, that only a few individuals can use.

It is currently unknown if Zoro is one of these people. Armament Haki: A form of Haki that allows the user to create an "invisible armor" around themselves. With that, they can defend against attacks that would otherwise cause harm, and if trained well, use it to deliver stronger attacks. Besides the increase of strength, it is the only form of attack that doesn't involve Seastone that can hit any Devil Fruit user, being able to hit the user's original body even if it's a Logia user. It can also be used in weapons. Observation Haki: A form of Haki that allows the user to sense the presence of his opponents. A user of this type of Haki can predict an opponent's moves before he gets hit. This works by showing the user an image or brief "premonition" of what the opponent will do, manifested as a mental image in the user's mind's eye, and the damage the user will take if the attack "hit" for real. It appears that the more killer intent the enemy has the easier they are to predict, though more efficient users can predict future moves regardless of whether there are ambient murderous intents or not. Including the distance, location, and where the opponent may strike next. Conqueror's Haki: The ability to knock out someone else or a large group. While inexperienced users are restricted to intimidating one being or blindly knocking out any with weak wills around them, those with more expertise can pick out weak willed individuals in a large group to knock out. Can also be used as an AOE energy blast and to tame animals.