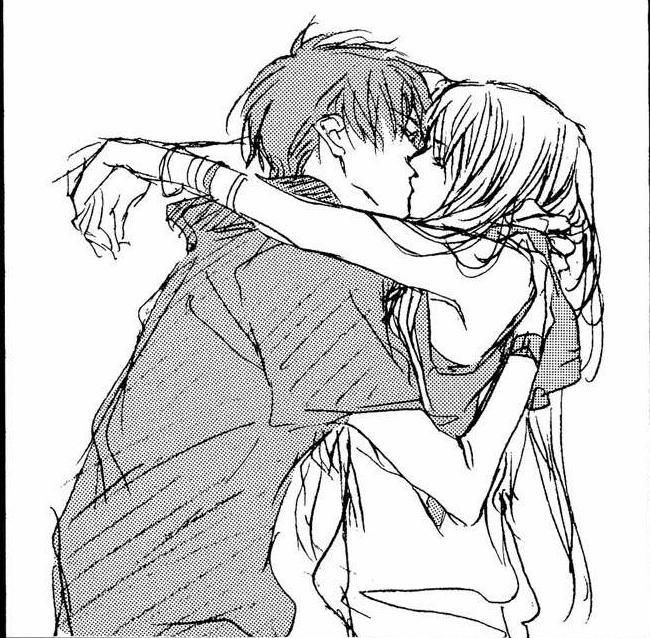 It's amazing how well-realized Punpun becomes as a character - he feels very much like a child, with his various fears broadly realized. For example, Punpun is told very early on that oil will run out and the world will end, and this fear becomes a frequent preoccupation of his in a way that recalls the way that children will obsess over scary things they've heard in an attempt to make sense of them. This also plays out with Punpun and his friends' fascination towards sex, forming the PWC in hopes of catching a glimpse of sex. Aside from making the curiosity of these kids feel realistic, this is also quite funny as we later get to see Punpun worry incessantly about sex, culminating in a recurring image of him being chased by marauding vaginal monsters in an abstract dream of his. However, Punpun's fears and worries are never trivialized, and in the end they feel strikingly genuine as part of the process of a young-boy trying to make sense of and exercise a faint bit of control over a confusing and often unsettling world. Asano's stylistic decisions in telling this story are incredibly distinctive and effective - Punpun and his family are drawn as cartoon birds but are seen within the story by others as regular people. Additionally, Punpun never directly speaks in this volume, only reacting non-verbally and on rare occasions having his lines repeated by the narrator. However, Punpun's interactions with the world are done extremely effectively, because Asano cleverly uses Punpun's body-language and actions to portray his thoughts to the reader. This is incredibly successful, and Punpun is a more expressive character in his bird form than most other protagonists in this medium. I loved how this also invested me in Punpun's character by forcing me to take an active role in understanding his state of mind through his body language rather than simply looking at his face. As Punpun went through his trials and tribulations in this volume, I could feel myself becoming incredibly invested in this small cartoon bird, with his struggles portrayed in an amazing affective way thanks to Asano's choices.