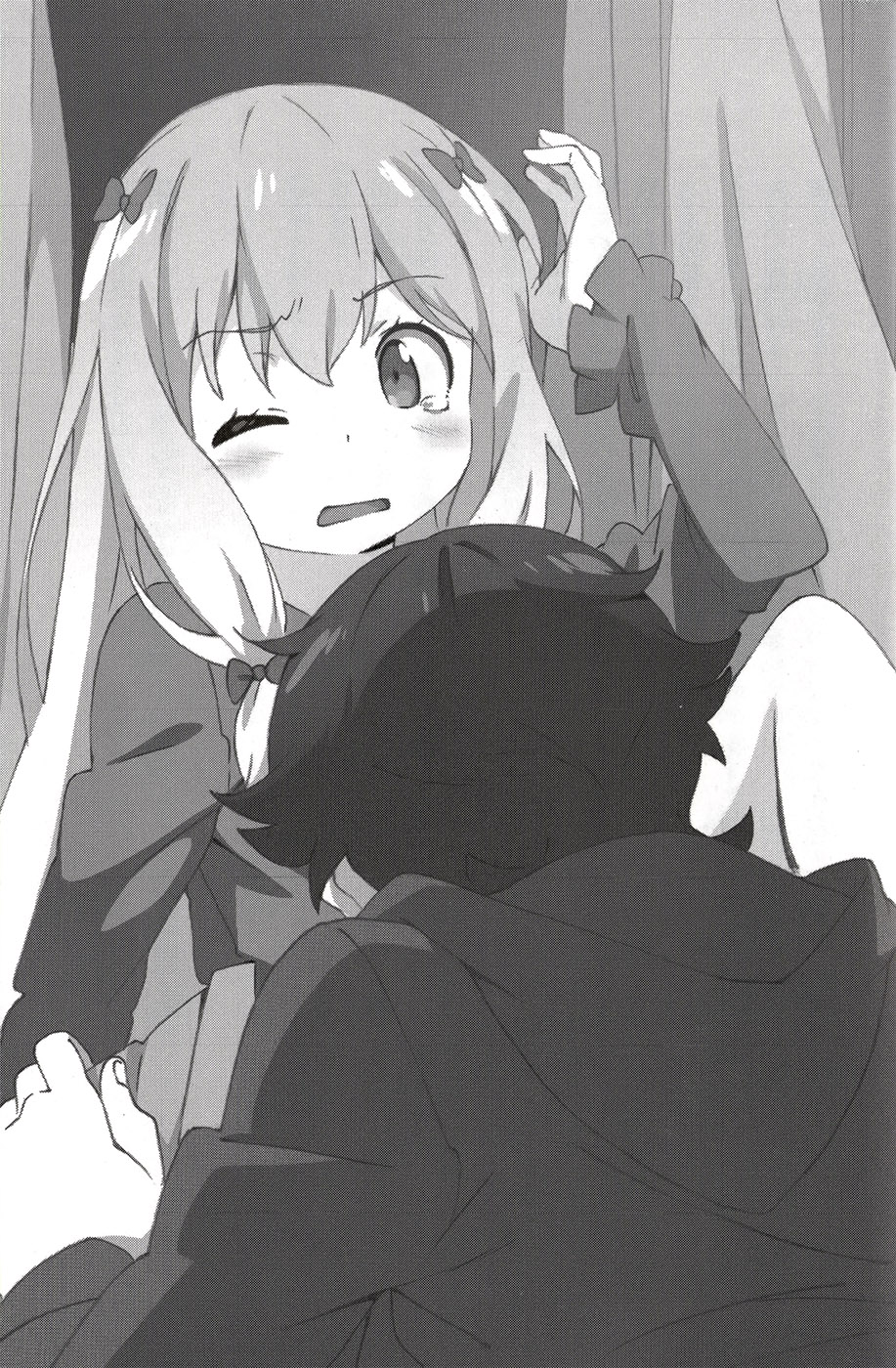 The age of the gods of ancient times. The first generation Dragon God is born, tears down the barriers between worlds, and destroys multiple worlds. All races flee to the Human World. The five Dragon Generals betray the Dragon God, and their battle ends in mutual defeat. The Dragon God sends his son Orsted into the future to defeat Hitogami. Demon Dragon King Laplace (one of the five Dragon Generals) is given a mission by the Dragon God. The Dragon God is killed by Hitogami. Laplace escapes the collapsing Dragon World, and begins to wander the Human World as the second generation Dragon God. The legend states that all worlds but the Human World were destroyed, but at least the Void World still exists. The age of chaos. The different races in the Human World are mixed together and struggle. Eventually, each race starts to live in different parts of the world. Only the humans and demons continue to quarrel. Laplace begins studying techniques and spells for the sake of defeating Hitogami, with the goal of one day teaching them to Orsted. Start of the First Great Human-Demon War. The First Great Human-Demon War is ended when the hero Arusu leads his six comrades to defeat the five Demon Lords and Demon World Emperor Kishirika. Humans wage war on other races and each other for a period of about 500 years.

The first paragraph is according to legend.

Kishirika revives. Start of the Second Great Human-Demon War, led by Kishirika. The demons ally with the beast race and sea race, and corner the humans.. Golden Knight Aldebaran, the Fighting God, appears and turns the tide of the war. At the very end, his attack punches a huge hole in the Great Continent, forming a sea and splitting it into the Central Continent and Demon Continent. The Fighting God was a disciple of Hitogami. His final battle was against Laplace, and caused Laplace's soul to split exactly in half, causing him to lose his memories and be split into two individuals, the Technique God Laplace who seeks to defeat a god and the Demon God Laplace who hates humans. At the same time, the Fighting God armor was broken and fell to the bottom of the ocean. The Second Great Human-Demon War ends. The first paragraph is according to legend. Second is from Orsted in chapter 157. Kishirika also mentioned the battle in volume 4. Popular legend falsely claims that Aldebaran fought Kishirika, not Laplace. Based on Randolph's testimony in chapter 210, the identity of the Fighting God in the last battle may have been Badigadi. It's not certain that the Aldebaran of legend and the Fighting God refer to the same person, either (Rudeus just assumed so).

The demons struggle for resources, and their population drops.

A time of peace. Humans gradually segregate demons onto the Demon Continent and block it. The demons struggle for resources, and their population drops. Demon God Laplace is born. He unites the demons and subjugates the Demon Continent. Start of the Laplace War. Laplace persuades the sea race and beast race, and attacks the Central Continent. Quickly gains control of the north and south part, and invades the west from both directions. The Seven Heroes persuade the sea race to lift the blockade of the sea, and ally with the beast race by holding hostage the children of their heads of families. The last remaining human country, the Asura Kingdom, put all their efforts into a final assault. The Seven Heroes led the Miris holy order of knights and the beast race in an attack on Laplace's stronghold. In the final battle, four of the Seven Heroes die, leaving Dragon God Ulpen, the first generation North God Kalman, and Armored Dragon King Perugius. But Laplace's close allies are annihilated and Laplace is sealed. Ruijerd Superdia also aids the Heroes during the final battle. The war ends.According to legend (Citation Required). Ruijerd's role was mentioned by himself and Perugius. The end of the Laplace war marked the start of the Armored Dragon Calendar (甲龍歴). K for Kou (Armored). Winter, Start of Orsted's time loop.

He appears in a nameless forest in the northern part of the Central Continent. Fall Roxy Migurdia is born. Roxy Migurdia leaves her village. Fall Paul Greyrat is born. Spring Zenith Greyrat is born. Paul Greyrat leaves home at the age of twelve. Roxy enrolls in Ranoa Magic University. Eris Boreas Greyrat is born. Rudeus Greyrat is born. Sylphiette is born in the fall. The Holy Beast is born. Linia Dedoldia and Pursena Adoldia are born. Rudeus learns the written language. He begins to read books. Relying on a magic textbook, Rudeus begins to use magic. He notices that his total amount of mana is being increased. He learned chantless magic. Rudeus meets Roxy and begins to get taught magic by her. He also begins to get taught swordsmanship by Paul. Rudeus is led out of the house by Roxy. He becomes a Water Saint-class magician. Roxy goes off on her own.

A red orb appears in mid-air inside the Boreas estate. Rudeus notices Sylphiette is a girl (starts to call her Sylphy). Zenith and Lilia become pregnant. Rudeus becomes respected by Lilia. Aisha and Norn are born. He meets Ghislaine and Eris. Rudeus notices the red orb floating in mid-air on the top floor of the Boreas estate. Rudeus is given Aqua Heartia as a present on his 10th birthday. The next day, the Teleport Incident occurs in the Fittoa region. Rudeus and Eris teleport to the Demon Continent. Sylphiette teleports to the Asura Kingdom. Rudeus accepts an eye of foresight from Demon Emperor Kishirika Kishirisu. He saves captured beast race children and the Holy Beast. He meets Geese. He passes the Great Forest's rainy season in the beast race village. He reunites and reconciles with Paul in the Holy Country Mailing list. Princess Ariel is driven out of the kingdom of Asura. Rudeus reunites with Aisha and Lilia in the kingdom of Shirone. He is confined by Pax and saved by Zanoba. He is almost killed by the Dragon God Orsted at the Red Dragon Mountains.

Rudeus becomes famous as "Quagmire" in the northern part of the central continent.

Sylphy enrolls in Ranoa Magic University along with Ariel and Luke. Eris. She parts ways with him the next morning to train at the Holy Land of the Sword. Roxy meets Kishirika in the demon continent and thanks to her, finds the localization of Zenith Greyrat in a labyrinth in the Bergarit Continent. Elinalise Dragonroad travels with the demon King Badigadi to give the news of Rudeus Greyrat, Meanwhile Roxy and Tallhand travel to Millis to give the news to Paul. After the Departure of Eris, Rudeus decides to travel to the northern part of the central continent. Zenith, on the way he meets the party Counter Arrow. Rudeus becomes famous as "Quagmire" in the northern part of the central continent. Elinalise Dragonroad finds Rudeus and tells him the news about his mother. He receives an invitation to become a special student from Ranoa Magic University's Vice Principal Jinas, and heads toward the university after waiting for the snow to thaw. He enrolls in Ranoa Magic University. He meets Linia Dedoldia, Pursena Adoldia, and Cliff Grimoire. He reunites with Zanoba. Rudeus discovers Fitz's identity. He and Sylphy become lovers. He buys and prepares a house, and marries Sylphy. Aisha and Norn settle into Sharia. Aisha becomes his maid. Norn enrolls in Ranoa Magic University and moves into the dorm. He ignores Hitogami's advice and goes to the continent of Begaritto with Elinalise. Paul dies and Zenith is rescued.

He reunites with Roxy. He marries Roxy and Lucy is born. Rudeus becomes a Water King-class magician. Elinalise and Cliff marry. Formation of the "Norn Greyrat Public Fan Club". Rinia and Pursena graduates. Rudeus becomes a fourth year student. Nanahoshi summons a watermelon from Earth. Rudeus goes to the Sky Fortress to ask Armored Dragon King Perugius about treating Zenith. He goes to the Demon Continent to ask Kishirika about how to treat Nanahoshi's Drine disease. He fights the immortal Demon Lord Atofe. He learns of Hitogami's plans after meeting future Rudeus, and disposes of the mouse with magic stone disease. He is coerced into battling Orsted by Hitogami and with the help of Zanoba and Cliff creates the magic armor. He reunites with Eris. Orsted defeats him and he becomes Orsted's subordinate. He marries Eris. He summons the Holy Beast from the Great Forest, and named him Leo. Orsted orders him to guard Princess Ariel, who ascends to the throne of Asura. He begins training to protect himself and his family. Clive Grimoire and Lara Greyrat is born. Linia and Pursena return to Sharia. Zanoba briefly returns to Shirone with Rudeus and company, and becomes Orsted's subordinate. Ars Greyrat is born.