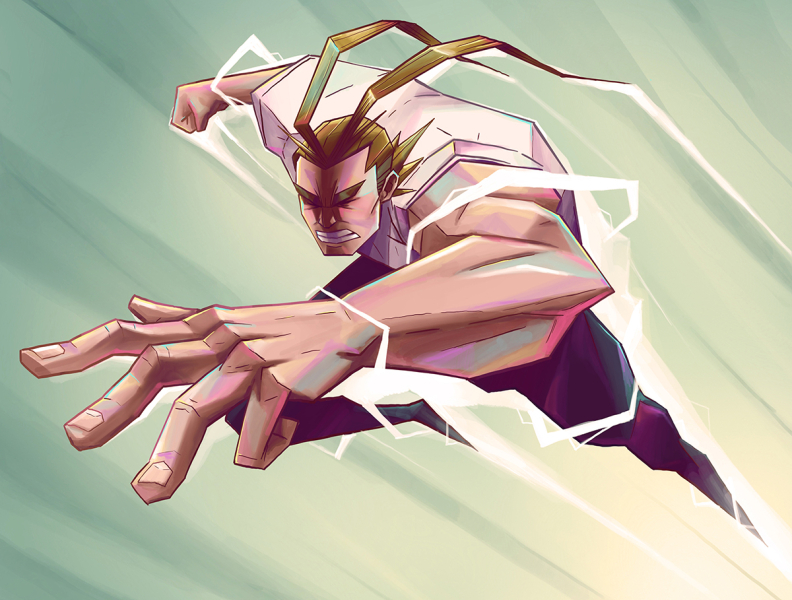 Keiki is an average looking teenage boy with blue/purple eyes and hair. He has described himself as not the most good-looking guy when comparing himself to Shouma Akiyama whilst asking why he would be given a love letter in the first place. He usually wears his school uniform but can also be seen wearing smart/casual clothing when on dates and casual clothing when at home. Keiki is a kind-hearted, friendly and considerate guy who cares for his close friends and family, and is, in turn, cared for and liked just as much by them. His kindness is pointed out by Shouma, as his good trait as to why girls would have a reason to like or love him. Keiki also wants a girlfriend and is annoyed by the many couples he sees and is quite envious of them. He also has a rare trait as a harem protagonist as he is not very dense. He has been able to figure out the feelings some girls hold for him in some respect but did not know their perverted sides. He also seems to have quite a bit of confidence/courage when interacting with the girls as shown when he confronts Sayuki about her secret (which he thinks is her romantic feelings for him). He is quite assertive when it comes to finding out who is in love with him. He may not be dense, but he has a hard time understanding the emotions of girls and doesn't seem to completely grasp the situation. He also believes that there should be 'love' behind his acceptance of the girl's true nature towards him.

39; romantic feelings for him.

After helping Sayuki Tokihara clean up the club room with the help of Mizuha Kiryuu, Mao Nanjou and Yuika Koga he insists that they leave him to put the cleaning equipment away so they can go home. After he returns, however, he is met with a Love letter reading "To Kiryu Keiki, I Love You". The letter had no name but was accompanied by white panties who belonged to the girl who wrote the letter. He strives to find this mystery girl dubbed "Cinderella". At some point in Light Novel, he became a temporary member of the student council as a way to postpone the calligraphy club disbandment caused by the club budgets being misused until the debt is paid off. Keiki cares for Sayuki's well-being as he was concerned for her when he stated she had bags under her eyes and seemed tired (he said this half-jokingly). He has a friendly and playful relationship with his senpai and they both display that sort of senpai, kohai relationship playfully. After Keiki saved the Calligraphy Club from being shut-down, Sayuki became grateful for him. Throughout their time together alone in the club, she seems to have gained 'twisted' romantic feelings for him. She was envious of the relationship of a dog and its owner and this is revealed to be her perverted 'secret' which is for Keiki to become her owner/master and goes as far as to wear a collar and lead. Keiki is reluctant to accept Sayuki's Masochistic request.

Keiki first met her in the library reading by her lonesome.

Sayuki teases Keiki by trying to seduce him and showing her Masochistic side in his presence. Keiki cares for Yuika and finds her as the cutest thing in the world. He helps out in the library alongside her and they playfully chat when together. He is quite protective over her as shown when she was cornered by some players trying to pick her up, Kiryuu protected her by taking her hand and running off. Keiki first met her in the library reading by her lonesome. At first, she was cold and uninterested towards Keiki, but he persisted to come to her when she was alone over and over again, and each time she began to warm up to him and eventually became more comfortable around him and her pain of loneliness was filled by him. It is suggested that she grew feelings towards him after this and becomes jealous when her senpai is friendly with other girls especially Sayuki. It is revealed that Yuika's 'romantic feelings' for Keiki are just as 'twisted' as Sayuki. In contrast to Sayuki's Masochistic side, Yuika is a complete Fendom/Sadist deep down and confessed this to Keiki after their date. She wants to Dominate him and become his master.

She wants him as a slave/servant. She wants to change Keiki so that he becomes submissive and tries to seduce him in any way. Keiki and Mizuha have a very close brother-sister relationship that both of them seem to have somewhat sis-con and bro-con tendencies. Keiki is shown to be quite affectionate towards his sister both physically and verbally as he is seen pampering her, spoiling her by cuddling her and/or patting her head. The same can be said for Mizuha as she is shown to be asleep with him from the beginning of episode 1, to his surprise and chagrin. They also rely on one another, shown when Keiki asks for advice about how to date a girl properly in preparation for his date with Yuika Koga which goes well thanks to Mizuha's advice. When it is revealed that Keiki and Mizuha are not blood-related, Mizuha starts to be aggressive in pursuing Keiki as a possible romantic partner as she joins the Calligraphy Club. They are close friends and he states that she is easy to talk to. They are shown to be on quite friendly terms as shown when Keiki asked for advice from her, and the abuse she gives him when shes flustered mostly being her pinching/jabbing his side.

Keiki has a friendly relationship with Ayano and they get along quite well.

She is shown to have concern for his well-being as when he was knocked out in a game of basketball, she stayed with him in the nurse's office until he came to. She is also hinted at having some feelings towards him as when he asks if she'd support him if he was interested in a girl, she said she wouldn't. Nanjou has been jealous over Keiki as revealed in episode 3 of the anime as she doesn't want anyone to be with him, but Shouma Akiyama. She doesn't like how Sayuki Tokihara and Yuika Koga have been all over him that she wants him to date Akiyama so that she would have inspiration for her BL doujinshi. Keiki has a friendly relationship with Ayano and they get along quite well. They often run into each other throughout the school such as in the library or corridors. Due to her clumsiness Keiki has saved her a few times for instance, when she fell down the stairs and he caught her etc. It seems she has romantic feelings towards him as she likes to sniff him and get close to him, but this is later revealed to be her perverted nature. Shouma is Keiki's best friend and is his first choice when looking for advice. They have a funny and trusting relationship as they often joke around with each other and feel comfortable talking about their troubles. They are usually seen hanging around together and sitting together during lunch.

Shouma wants to help Keiki in figuring out who the mystery "Cinderella" girl is. Keiki has a friendly relationship with Koharu however has been forced to be the middle man or the "cupid" that will bring Otori and Shouma together. She didn't know how else to get Keiki's help so she blackmailed him with a photo she took of him and Sayuki. The name Keiki means "intelligent" (慧, kei) and "brightness, radiance, shine, sparkle, gleam, twinkle" (輝, ki). Because his name is the Japanese pronunciation of the word "cake" that Sayuki Tokihara nicknames him "Cake-kun". Still on this too, Mao Nanjou named the two protagonists of her manga "Shouto" and "Cake", like the Japanese pronunciation of "Short cake". Keiki's taste in girl's clothing are maid costumes, nurse outfits, bunny girls and school swimsuits. Keiki's favorite drink is café au lait. Keiki dubs this mystery girl as "Cinderella" and tries to find out who she is.