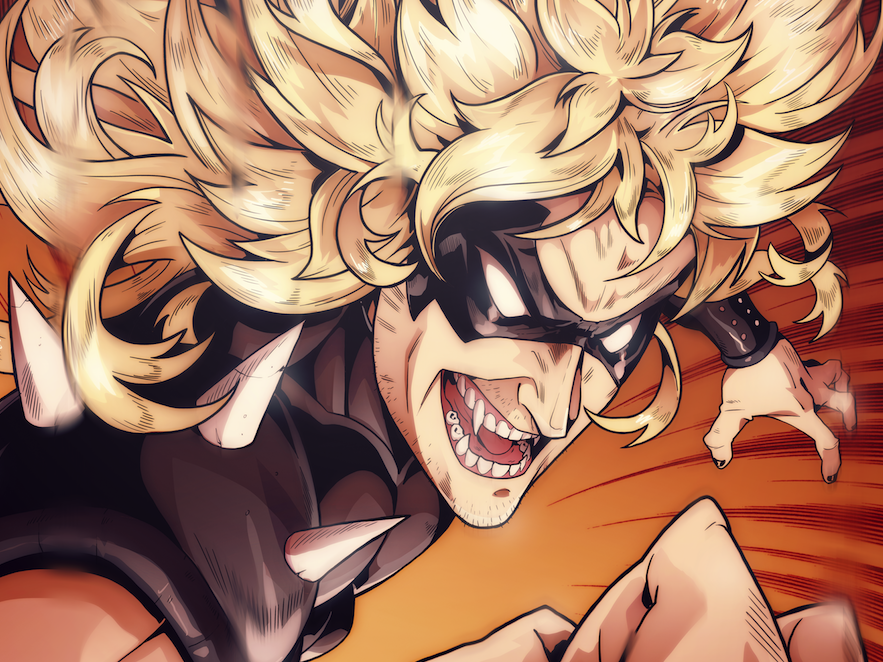 Rimuru has taken his rightful place as the strongest character in TenSura; however, many argue that the slime can hold its own against powerful characters in anime in general. While Rimuru starts out as a mere human in a different world to a literal slime in this world, he evolves at an absurd pace. After becoming a demon slime, to a True Dragon, to reaching Godhood by the end, his power overwhelms all. By the end, not only can he journey anywhere at any time he likes, but he can also travel between worlds. Due to Rimuru's attainment of such fearsome powers, he cannot escape being compared to the powerful elite of anime. Is a slime stronger than Goku, Saitama, Naruto, and the rest? 1. Can Rimuru Defeat Some of the Strongest Anime Characters? I. Can Rimuru Beat Goku? Rimuru can defeat Goku fairly easily. While Goku is extremely powerful, he is incomparable to the multiverse threat that the slime poses. As a literal God, Rimuru can destroy and create multiple universes, making his power unfathomable. It is not too far-fetched to say that Goku is one of the strongest characters in Shonen anime.

With his newly acquired Ultra Instinct form, he continues to get more powerful over time. However, while the DBZ universe and its characters are powerful, the isekai series' surpasses them. In TenSura, Rimuru becomes an immortal God that can create and destroy multiple universes. With infinite magic energy, the ability to travel through space and time, and many other hax, there's barely any character that can stand against him, let alone Goku. II. Can Rimuru Beat Saitama? Rimuru Tempest can easily beat Saitama despite the latter's gag character privileges. In front of an isekai God, a superhuman such as One Punch Man stands no chance of winning under any conditions. While Saitama's whole schtick is to be the most powerful and defeat every enemy with "One Punch," that is only in relation to the world of OPM. When facing Rimuru, Saitama loses horribly. From what we have seen so far, One Punch Man has superhuman strength and can blast apart meteors to pieces.

Rimuru, on the other hand, can destroy entire worlds, let alone a falling rock. Furthermore, Saitama's one mode of attack, ie, physical attacks, is useless in front of Rimuru and most powerful people in TenSura due to their ability to nullify them. In short, with just this one counter, One Punch Man loses all grounds to challenge Rimuru. III. Can Rimuru Beat Milim? Rimuru Tempest can beat Milim after engulfing and acquiring the powers of Veldora, thus becoming a true dragon. With this strength, Rimuru surpasses Milim, the oldest demon lord in the series. By the end of the series, he attains Godhood and becomes the strongest character. Milim, the oldest demon lord, is the child of True dragon Veldanava and Lucia and has inherited her father's powers. As a genuine Special S Rank Catastrophe-class, she is one of the world's most powerful beings. However, after Rimuru unlocks his True Dragon form and gains the ability to warp reality itself, she is no longer a match for him. IV. Can Rimuru Beat Zeno? Rimuru can beat Zeno due to his ability to warp reality and manipulate fate. Not only has he obtained power that exceeds Zeno's, but he has also transcended the concepts of life, death, time, and space.

Rimuru is night-omnipotent, omniscient, and basically, a God that cannot be defeated. Furthermore, while Zeno can erase someone's existence, Rimuru has already fought and consumed enemies with similar powers. Furthermore, he can create his own space that is not part of the multiverse, which he has absolute control over. It is impossible to defeat Rimuru, and not even Zeno from DBZ can attempt to take him on with the certainty of success. V. Can Rimuru Beat Naruto? Rimuru can easily beat Naruto, with the latter not even standing a winning chance. Due to his true nature as a slime, even if Rimuru does not retain his EOS powers, he can easily swallow everything Naruto throws at him. Let alone chakra attacks, Rimuru can wholly swallow Kurama itself. If we talk about the TenSura anime specifically, Naruto and Rimuru might both stand a fair chance against each other; however, taking EoS Rimuru from the web novel into consideration, the Hokage lacks a lot. If even characters like Goku and Zeno cannot compare to Rimuru, Naruto is obviously out of the question. VI. Can Rimuru Beat Meliodas? Rimuru can beat Meliodas from Seven Deadly Sins without expending much effort. The slimeverse is on an entirely different power level than the seven deadly sins verse, and Meliodas can barely pose any threat to the True Demon Lords, let alone Rimuru. Meliodas is the Dragon's Sin of Wrath and captain of the Seven Deadly Sins. He was also the head of the Ten Commandments and the oldest son of the Demon King.

After successfully absorbing all of the Commandments, Meliodas assumed the Demon King's position, increasing his powers to the same godly levels as his father and becoming literally immortal & invincible. Rimuru, on the other hand, as stated above, became a god with the power to warp reality. Not only does he possess the knowledge of every spell, but he can copy any ability he sees. Rimuru's power also overwhelms everything, as he can create and destroy hundreds of universes within moments. Meliodas miserably loses against such an opponent. 2. Who Can Defeat Rimuru? As a God, few characters can pose a threat to Rimuru, all of which are capable of destroying universes. Veldanava, in his prime, can possibly defeat Rimuru, or at least stand a fair chance against him. However, other than the original god, there's no other existence capable of threatening and defeating Rimuru in the TenSura verse. From outside the series, however, quite a few are capable enough of defeating Rimuru. Simon from Tengen Toppa Gurren Lagann is one such character.

Other than him, Yogiri Takatou's reflexive powers might prove to be extremely effective against the slime and could possibly beat him. However, unlike Rimuru's anime version, fighting against the web novel's Rimuru is no easy task, and winning is even more difficult; it is possible that only the freaks from other isekai novels stand a chance. That Time I Got Reincarnated as Slime is a Japanese manga series written by Fuse and illustrated by Mitz Vah. It was serialized online in 2013 but was later shifted to Micro Magazine as a light novel in 2014. It currently has sixteen volumes. Satoru Mikami leads a very ordinary life for 37 years until he is stabbed to death by a passing robber. Upon making requests, Satoru is reincarnated as a slime in another world. Here, he gains the name of Rimuru Tempest and befriends a True Dragon Veldora. Rimuru sets for a journey to free his friend Veldora from a seal, all the while tackling the challenges this world brings him. Sometimes we include links to online retail stores and/or online campaigns. If you click on one and make a purchase we may receive a small commission. For more information, go here.